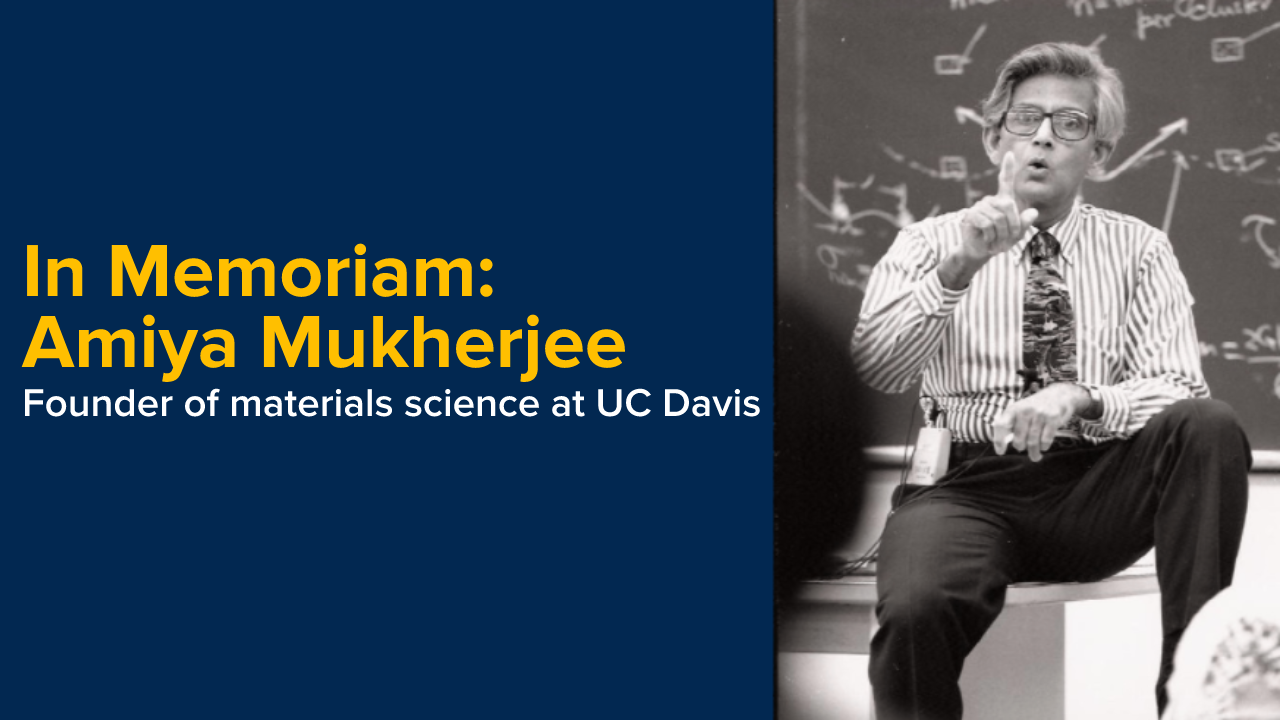 The Department of Materials Science and Engineering (MSE) is saddened by the passing of Distinguished Professor Amiya Mukherjee. In his five-decade career, Mukherjee single-handedly founded the materials science program at UC Davis, became an internationally-recognized leader in metallurgy, mechanical creep and nanoceramics and inspired generations of students and colleagues through his teaching, mentorship and friendship.

“I will always cherish Amiya as a mentor and friend,” said Professor Klaus van Benthem. “Our department has lost a great colleague, while our discipline has lost one of its giants.”

His life and career are remembered by his colleagues and students, and through a 2010 interview between him and professor emeritus James Shackelford. 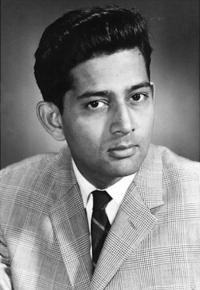 Mukherjee was a metallurgist by training, but he had many different research interests throughout his long career, working on processing, characterization, mechanical and physical properties, failure and modeling for metals, nanocrystalline materials and ceramics.

Mukherjee studied at a time of significant growth and change in the field. Traditional metallurgical science was beginning to incorporate new ideas from physics and President Kennedy’s challenge to send humans to the moon placed a new nationwide focus on materials. This timing, in part, helped him become a leader and pioneer.

He started his career at UC Berkeley’s Department of Mineral Technology and joined UC Davis in 1966. He established himself as an international leader in creep deformation, the phenomenon of materials slowly sliding away or toward something like ice sliding down a mountain. Mukherjee then wondered if he could use the same conditions to process materials into a specific shape to make processing faster and cheaper. This technique is known as superplastic processing, and it became a theme throughout the rest of his career.

“In one way, we’re trying to make the material deform as little as possible and the other way, after learning what makes it deform, you encourage the deformation to the furthest extent possible. It was kind of an oxymoron way of doing research,” he explained.

In the latter part of his career, Mukherjee became, as he described it, a “born again ceramicist,” realizing that many of the techniques used in metallurgy hadn’t been applied to ceramics yet.

Mukherjee authored more than 700 publications and collected numerous international accolades for his work. He won the prestigious Alexander von Humboldt Research Award twice, receiving the Centennial Gold Medal from the University of Tokyo, the Institute Medal from the Max Planck Institute for Solid State Research and the Bochvar Medal in Metal Physics from the University of Tokyo. He was also elected a Materials Research Society Fellow in 2012, an honor only 0.2% of members receive.

Throughout his career, Mukherjee emphasized the importance of interdisciplinary work in materials science, building connections with his colleagues in civil, mechanical, electrical and chemical engineering on campus and around the world as he performed his research. He was also a materials ambassador to his students to make sure they understood the important role they play in enabling functioning spacecraft, bridges and circuits.

“When I teach, I don’t expect all the students to be won over to materials science per se, but I want them to start thinking in materials principles,” he said. “[For example], when an integrated silicon chip fails in an integrated circuit, the failure is at the microscopic level. The consequences are enormous at every level.”

“Professor Mukherjee was so passionate about materials,” said Valerie Gibson ’86, ’00. “He made them exciting and understanding their behaviors exciting, and he made me think that materials [engineering] was a cool thing to do.”

“I think teaching is kind of an activity in which you can see the sheer joy of learning that can be shared time and again in a classroom experience,” he said. “The act of teaching has to be so that the instructor identifies with the subject and with the people he’s teaching to because … the students quickly find out who is just lecturing and who is really teaching and trying to reach them.”

While at Berkeley, Mukherjee learned that the then-new UC Davis College of Engineering was looking for someone to start a materials science program, so he answered the call and joined the Department of Mechanical Engineering in 1966. In his first few years, he single-handedly developed and taught 14 new courses and established an official materials science curriculum in 1969.

“I’m delighted that I was there first to start the materials program,” he said. “The early years were difficult because I was teaching courses in mechanical engineering and civil engineering. I was doing that to put food on the table, and then in the night, writing like a beaver about the petition for the approval of a new course.”

By the 1980s, Mukherjee had recruited new colleagues, made strong connections with materials-aligned researchers across the university and established a Materials and Devices Research Group to promote collaborations and develop materials curriculum. The group turned into the Materials Science Division in the Department of Mechanical Engineering, and later part of the Department of Chemical Engineering and Materials Science. Mukherjee’s kindness, interdisciplinary nature and focus on teaching are common threads that the program has carried with it throughout its history.

“Professor Mukherjee had an amazing talent for slowing things down and calming a situation,” said financial analyst Gwen Caramanica. “No matter what the situation, he always spoke calmly and deliberately and he always made me feel heard and completely confident that we had the same expectations for next steps. He was very calm, kind, capable and present in the given moment.”

Mukherjee officially retired in 2007, but never stopped his research program. He continued to publish until this year and remained a familiar face on campus. He attended important faculty meetings, welcomed faculty candidates to campus and encouraged young faculty members as they started their research programs.

“I am going to miss Amiya's advice, his kind words and especially his smile,” said Assistant Professor Roopali Kukreja, who joined the department in 2016. “I always remember that in my initial days at UC Davis, he would come to my office and check if everything was going well. As a junior faculty, it was heartening and very welcoming to interact with him.”

“I first got to know Amiya during my very first visit to Davis when interviewing,” said van Benthem. “He welcomed me into his laboratory for many exciting discussions about superplasticity and grain boundary structures in Si₃N₄. It was that interaction with him and his passion that ultimately brought me to Davis.”

His faculty, staff and students all especially remember his kindness and willingness to offer advice, support and friendship.

"Professor Mukherjee, or just 'Professor' as the people in his research group and I called him, was not only a great teacher and researcher, but he was also a very caring person," said Deb Snyder, who worked with Mukherjee as a staff member for over 25 years. "He treated his group, including me, like family and greatly impacted so many lives."

“He was a gentle, thoughtful soul. In this world he was a very bright light that I will truly miss. I feel very honored to have known and worked with him over the years,” said Susan Lopez, the department’s chief administrative officer.

“Amiya had been life, energy, support not only for his family, but for many of us,” said MSE Professor Emerita Joanna Groza. “I have been grateful to him for his continuous guidance and will always fondly remember him.”

The University of California flag was flown at half-staff at the UC Davis Memorial Union from September 22 – 24 in his memory. Information about a memorial will be shared when it is available.